Enter to win an early copy.

Fay Wray and Robert Riskin: A Hollywood Memoir is on sale 26 February 2019.

Enter to win an early copy.

Fay Wray and Robert Riskin: A Hollywood Memoir is on sale 26 February 2019. 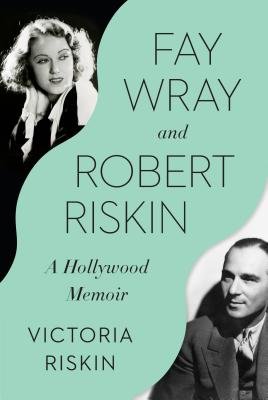 A Hollywood love story, a Hollywood memoir, a (dual) Hollywood biography--the woman who stole the heart of King Kong and the man, Robert Riskin, one of the greatest screenwriters of all time, an Academy Award winner, producer, and longtime collaborator with Frank Capra on eight pictures. By their daughter, an acclaimed writer and producer.

“Anyone who thinks that Fay Wray was just the girl screaming in King Kong’s hand as he climbs the Empire State Building is in for a big—and pleasant—surprise. Her daughter Victoria Riskin has written a fascinating, richly detailed and superbly illustrated account of the lives of two remarkable people, Fay Wray and star screenwriter Robert Riskin, that spans one of the most interesting periods of Hollywood from the advent of the talkies through the depression and the war and on through the time of the Hollywood blacklist; this is not only the love story of two brilliantly talented people, it is a brilliant piece of cinematic history, at once robust, touching and deeply satisfying, with a cast of characters that includes almost everybody of interest in those tumultuous years in the motion picture business. For anybody who is interested in the movies, Victoria Riskin’s book will be a must-read.”—Michael Korda, author of Charmed Lives

“Victoria Riskin’s memoir of her extraordinary parents, actress Fay Wray and screenwriter Robert Riskin, is a joy to read…a Hollywood memoir of rare depth and sensitivity. All will be captivated by this splendid dual biography of two of Hollywood’s most fascinating and enduringly important and colorful personalities.”—Joseph McBride, author of Frank Capra: The Catastrophe of Success

“I was always curious about life in Hollywood before I came here. I found out in this fascinating book. And wow! What a story it is!”—Kirk Douglas

“If this gracefully-written memoir was simply the rich and absorbing account of two unique and talented people who fell in love, that would be enough. But it is also a study of the creative process; a colorful account of Hollywood’s Golden Age; a telling slice of American history; and a deeply moving testament to a daughter’s love. An altogether wonderful book.”—Richard North Patterson

VICTORIA RISKIN is an award-winning writer and producer, adapting Willa Cather's My Ántonia for television and producing Carson McCullers's The Member of the Wedding. Riskin was president of the Writers Guild of America West and served for twelve years as a director of Human Rights Watch. She lives on Martha's Vineyard.